As we celebrate 4 months with the property, we thought we’d share a bit of what’s been done.  Our accounting is normally done on the trailing month, so we don’t have February numbers yet. This will be from October 15th to Feb 1.  So 3 and a 1/2 months.  Less than 16 weeks, but we’ll round up.

While we haven’t been able to do as much “prettying up” on the outside, there has been much more ‘under the hood’ work to do that anyone realized.  Once we got our hands on the property and started to dig in, we got to see just how big of a project it was.  Each time we try to pull guys off to do “pretty-up” projects, they get pulled to upgrade a unit for a new tenant, or troubleshoot an electrical issue, or fix a leaking pipe, or to replace a window, or to toss someone out (kidding about that last one… Maybe… 🙂

After four “short” months, we feel we’re over the hump.  We have many of the units upgraded and a stable tenant base to move forward   We can finally hit some projects we’ve been dying to do like landscaping, exterior paint, windows, and more.  But before we get into what we still want to do, let’s look at some fun numbers of what’s been done:

Trash:  If we tried to explain the amount of trash generated from the building upgrade, or what we’ve had to disposed from previous tenants, you’d think we were lying.  To date, we’ve gotten rid of an estimated  200 yards of trash.  To put that in perspective, that would fill a box that was over a MILE LONG by a MILE WIDE and a foot tall!  Math geeks: Feel free to correct me if I’m wrong.  And to our neighbors: We realize there is still trash outside.  We’re getting rid of it as fast as those roll off containers can come.

Units: The building consists of 56 units.  At this point, we’ve upgraded 30 of them.  And by “upgrade” that includes: Taking out the carpet, which is over the original hardwood floors, taking off the paneling on the walls, which is over the drywall (you can start to see where the trash comes from).  Sanding and refinishing the wood floors (not easy, the floors are beautiful, but they’re 75 years old). Painting the whole unit. New toilets, new vanity, new light fixtures, outlets, switches. New front doors, new window blinds, and more.  Upgrading a unit normally takes a good amount of time.  We’ve been upgrading units at a pace of about 2 a week since we’ve owned the place.  And this has to be coordinated with new leases to minimize downtime to help fund these upgrades.   It’s a balancing act: The manager gets yelled at by the owner if a unit is ready but not leased.  The manager gets yelled at by a tenant if the unit is leased and not ready.  Poor guy 🙂

Building interior:  It was, quite frankly, disgusting.  There is a lot of common area interior space (large open hallways). We thank our first “pioneer” tenants who moved in before this was addressed (they’ve been rewarded by lower rent. As the building gets better, rents go up. So bravery has it’s rewards).   In the last few months we’ve ripped out all the carpet in all of the common area hallways.  We’ve peeled up all the plywood and linoleum tile that was stuck over the entry and exists.  We’re in the process of cleaning and sanding the wood floors that were underneath.   We’ve fixed countless holes in the drywall.  Cleaned and painted most of the walls.  Removed dozens of signs that are, thankfully, no longer applicable (“No sleeping in hallways!”).   Each unit has a few windows looking into the hallway, each with several glass panes.  16 panes of glass per unit.  I’d estimate that half were broken and boarded up.  That’s almost 500 panes of glass that had to be replaced just in the interior units (we’re not done with this, but we’ve got most!).  The interior has also received new lighting: 16 recessed high end, low power, LED lights per building; 48 total.  This replaces the old florescent tube lights.  Also 20 hanging pendant lights per building; 60 total.   So over 100 new lights and lighting fixtures between the three building interior hallways to add safety and style.

Outside:  This is where we haven’t done as much as we’d like.  We’ve been primarily focused on units, and getting them ready for new tenants.  Each time we’re ready to tackle some “outside’ projects, our team gets called in to get a new unit ready, put in some new lighting, do the floors, or any number of the above listed projects.  That’s not to say nothing has been done.   We’ve ripped out most of the concrete in the center courtyard area to prep for our new landscaping   We’ve taken off the old ugly awnings (and put one new one on to see what we thought of it).  We’ve started some painting of the exterior non-brick surfaces.  We’ve put on a few black solar screens to help with energy efficiency but also the look of the property.   With the property better stabilized, this will be our next big effort. We’ve recently pulled permits to replace and fix bad fascia and soffits, after which all will be repainted along with all window trim.  After landscaping, we’ll be adding gated entry and perhaps replacing the railing work that exists now.  If there are any exterior / landscape designers that would like to volunteer their time, we’re open to it.  As we’ve mentioned many times: Design is NOT our strong suite 🙂

Cost: We debated sharing this, but figured why not.  As of Feb 1, there has been:

We’re excited to have given this building a new life.  We still have a LOT of work to do but we feel the winds at our back now and the rest is stuff that’s more along the lines of “nice to do” vs. the other stuff that was critical to the property running correctly at all.

Have any questions or comments?  Feel free to leave them below, or check out our Holman page and feel free to share there. 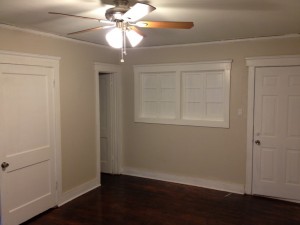