Thanks for visiting our site to get more information about our VRBO property on Sassafras.  We won’t take up too much time talking about what we and our guests like about the property (much of that is on the VRBO page itself), rather we wanted to use this space to respond to some of the negative reviews on the VRBO site.

Soon after we opened our home to VRBO, we had a potential guest cancel at the last minute. We tried to rebook the property so we could help with a refund but were not able to due to the short notice.  So both parties (us as owners, and the potential guests)  ended up losing 1/2 a booking.  We have a very lenient refund policy if someone has a change of plans, which can be viewed on our VRBO page.

Since then, we have been receiving several reviews from this “guest”.  Some of the complaints are downright silly since they never stayed at the property.  Some of those more ridiculous ‘reviews’ were removed by VRBO, but many others stayed.  When we contacted VRBO to tell them these reviews were fake by a person that’s never stayed at the property, and were told we could leave a response.  At first we started responding as if they were an actual guest, till we figured out what was going on.  For example, when we saw that someone commented that the master bedroom closet was locked (when there isn’t a locking knob on that door), or that there were BMWs in the driveway (our cleaning team confirmed no one was trying to park in our driveway) we knew something was wrong.

The new reviews from this person are a bit more creative as they ‘pile on’ anything negative in what might have been a real review (we appreciate honest criticisms!).  We always ask that if a guest finds something wrong or has a suggestion, to let us know so we can address.  Sadly, sometimes we’re not made aware of an issue from the guest directly so we can resolve, but rather the guest chooses to leave a review instead.  One example was the side door.  There was a gap that developed that was about 1″ high after a door sweep feel off.  Once it was brought to our attention we fixed it — before the next guest checked in.  However now our ‘guest’ is leaving complaints that bring up these issues (such as this door gap) long after they’ve been resolved.

Below we’ll summarize the complaints we’ve seen (mostly from that first person who never stayed) and address along with some photos we have taken.

2) Lighting: There is a lot of lighting in the home. No need for candles or flashlights we promise! We did have one guest suggest to us that we add lighting to the living room area, so we installed recessed lights on our next visit out.  Each bedroom has a ceiling fan with lights (nice LEDs).  The hallway has recessed lights, as does the kitchen and bathroom.  There are about 60 lights in the house.  We keep extras in the home so the cleaning team can replace any that are bad between guests.  Here are a few shots.  The master has a ceiling fan hanging from the vaulted ceiling but is controlled via switches on the wall (since it’s pretty high up there 🙂 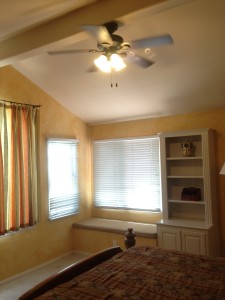 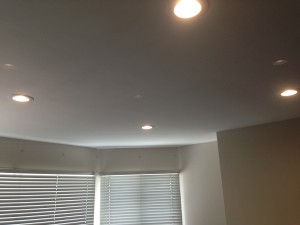 3) Gap in the door:  We did have a guest mention that the patio doors had a small gap at the bottom after the door sweep came off, so we fixed it very quickly (before the next guest came in).  Here are pictures of the front door and patio door 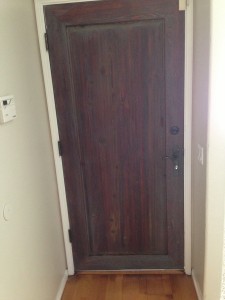 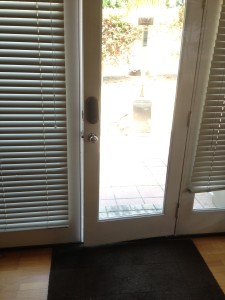 4) Windows: There are a lot of windows in the property.  Not all of them have screens, as I suspect is not all that uncommon.  Our “guest” said they don’t close; they do.  In fact, they’re typically always closed.  We welcome guests open the windows on nicer days when the AC isn’t in use.  Here are a picture of a few of the windows.  Closed, with screens. 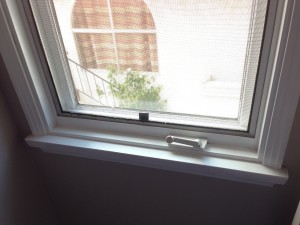 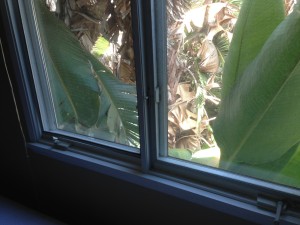 5) AC:  The property does have air conditioning, and it works very well!  Granted we almost never used it when we’re at the property due to the perfect weather in San Diego.  We have floor vents throughout the property and the AC reaches all rooms.

6) Towels: We have two closets full of towels for guest use.  From time to time they’ll walk away and if we get below a certain threshold (which is still more than a guest would need) our cleaning team purchases more.  Here is a pic of one of the towel closets. 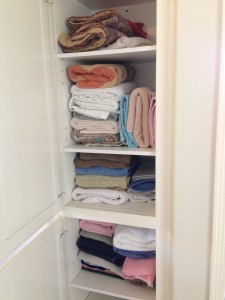 7) Dining room chairs:  We have 6 dining room chairs in the formal dining room.  All are in good shape.  We buy them from a shop down the street, where we get our other furniture.  If our cleaning team sees that one is broken, they replace it.  So far we’ve had to replace two chairs on two different occasions.  They’ve never been broken when a new guest comes in. 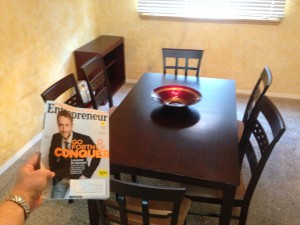 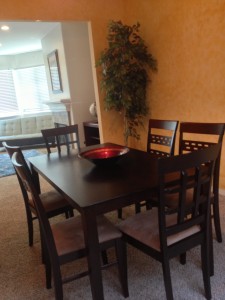 9) Futons:  Upstairs we have a large master bedroom with king size bed.  We also have two other rooms upstairs; one with a king bed, one with a queen.  Since there is so much space downstairs, we added two futons in the living room (a causal seating area with fireplace, separate from the family room off the kitchen) in case someone had additional guests staying at the property. Below are pictures of both futons.  The one with the small tear has a penny next to the rip to show its size in context (if you can’t see the rip, it’s about penny size).  The other photo shows the small stain on the middle left.  As an aside, we provide bedding (sheets, blankets, pillows) for both futons. 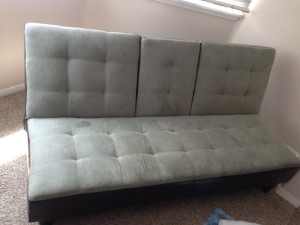 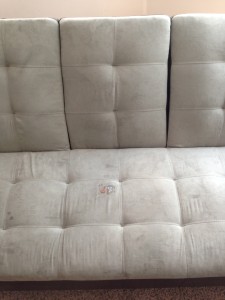 10) Wood floors downstairs: Also cleaned each time between guests.  There are areas that are “scratched” for lack of better word. Mostly by the trash compactor (where the trash compactor comes in/out it rubs on the wood floor, creating a mark) and a bit by the fridge..  Below you’ll see a photo of the scuff. 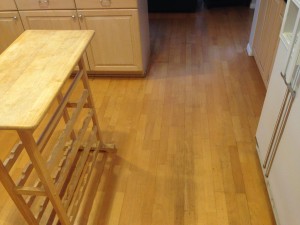 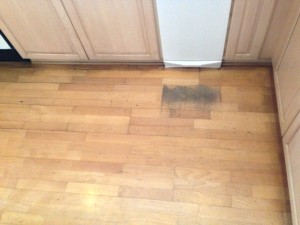 11) Patio furniture: We have a nice little patio area in the semi private side yard.  The table and chairs were picked out by my wife while we lived at the property.  A while back, a guest said some of the chairs were a bit worn, so we ended up buying a brand new very nice patio set with metal chairs, table, and umbrella.  We’ll get some photos taken as soon as we can.

If you have any concerns before renting, please contact me directly.  Either via this site or the VRBO site.  We’d never say our property is perfect but we do our best to make sure every guest has a great time in our home!